Sanity, stability and stress-relief: why our beloved pets have never been more important

They are time-keepers, normality-bringers and playthings. Here’s the science behind how cats and dogs help support our mental health 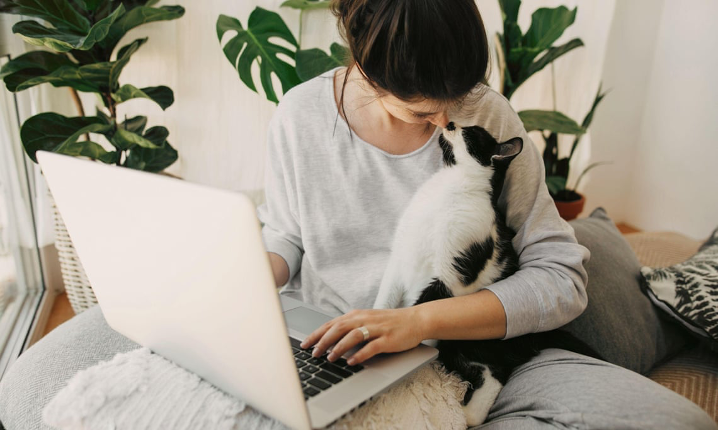 Lending a helping paw: many cats are only too happy to sit with their owners while they work from home. Photograph: Bogdan Kurylo/Alamy

Let’s start with some live updates from pets across the country. As I write this, I’m informed that Oscar the dog is delighting in hoovering up the extra scraps from under the kitchen table after the kids have eaten their home-school snacks and lunches. Morph, another dog in a different house, has become a regular pillow for a one-year-old. Yet another dog, Angus, is spending the afternoon in the upstairs bedroom, watching dogs running around in the park. The dogs there run wild and free, their forlorn owners caged in invisible two-metre boxes. Meanwhile, someone else informs me that her dog, Molly, is barking profusely because she, the owner, has gone momentarily out of view. (Molly is now used to her human cohabitees always being around). And then there’s Ada. Ada is barking very loud because she always barks very loud. And many, many dogs are barking because their humans are having important Zoom meetings that must not be disturbed.

In another house in another part of Britain, two rats called Celeste and Casio have been given free rein. Their owners see no reason to keep them caged, as they are all housebound now. Sally (a canary) has begun chirping incessantly while Netflix is on, while a tortoise called Claude cares not a whit about global events.

My own cat, Junior, is on my lap as I type – one-handed, because he has immobilised my left arm. He is desperate for love, as always. He pushes into the crotch of my elbow and curves the base of his tail against my chin so that his anus is yet again within inches of my face. I dodge and weave my head to see the computer screen. But for all the annoyance he is causing me, I have never loved Junior more. 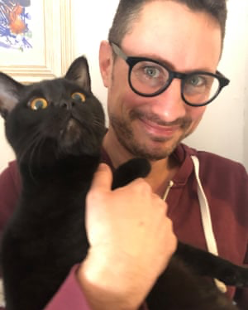 I am not the only cat owner having this kind of experience. Many other cats are walking on keyboards, nudging phones out of human hands or pinning home-workers into their chairs for hours on end. Nearly all of these cats will, I am told, be stroked with great glee and only one will be called a “monstrous ball ache” by its owner, a fellow author.

There is an assumption that pets can boost our mental health, and it is true that many studies link pets with a lowering of stress – usually by measuring the effect on a person’s blood pressure of the simple act of stroking an animal. It does not seem to matter too much which type of pet we stroke, dogs and cats, snakes or goats.Pet-owners also appear to make fewer visits to the doctor and sleep more soundly than those who lack such non-human company.

But not all studies show quite such clear benefits. Some suggest the reverse, and some of those involve analysis of more than 20,000 data points. In Finland, for instance, pet owners were discovered to be more, not less, likely to have higher blood pressure and cholesterol levels.

Why the conflicting results? Mostly, it’s because life is messy. Many studies fail to account for socioeconomic circumstances. Or those with happy, healthy minds might be more likely to acquire pets. The fact that our supermarkets are short of loo-roll at the moment does not mean that everyone is going to the toilet more often.

Surveys allow pet-owners to judge for themselves how they are feeling and an array of impressive statistics abound in such studies. Last year, in a Cats Protection survey of 2,000 cat owners, an overwhelming nine out of 10 said their pets helped to provide better mental health. Surveys by the animal welfare charity Blue Cross support this finding. In a recent paper, it reported that 43% of respondents agreed that their pets were “crucial in keeping my mental health in check”.

Loneliness is an emotional problem pets can help reduce. The presence of a dog or cat as a companion correlates well with reducing loneliness in women who live alone, older people and, perhaps, homeless people. Trials in one study show that loneliness in nursing homes could even be reduced by caring for a robotic dog.

But pets don’t always resolve loneliness. Sometimes, they can make it worse. One person who responded to me this week said they were lonely because their pet had recently died and they were stuck in an empty house, grief-stricken. I heard from people who were away from home, looking after ill relatives hundreds of miles away, and who missed their pets dearly. And others, such as nurses, who missed their pets during their long days at work. 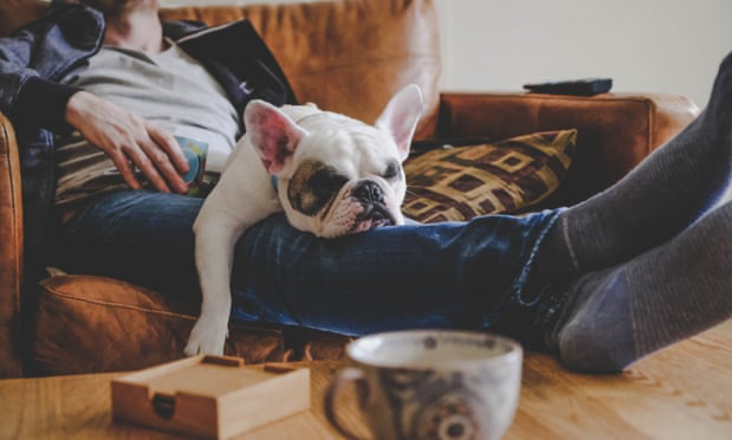 I look at Junior, our cat, asleep on the corner of the table, his head resting on my lap. He is one of the most beautiful things I have ever seen. We are so lucky to have him in our lives. Junior is one of two house cats, both recent rescues. This past three weeks of isolation are the first proper opportunity I have had to get to know their routines. That they both sleep together in the day on the top bunk of the girls’ bedroom. That they divide their gazing-out-of-the-window time equally between each of the upstairs windowsills. That one of them likes to sit on the floor of the downstairs toilet, waiting beside a tiny hole in the skirting board from which a family of tiny silverfish sometimes emerges.

Someone told me that their cat had become the house’s “water-cooler” during this crisis – a place where family tensions could be worked out in a different social space. Our own cats have become that place, too. When the pressure mounts, we find ourselves seeking out and stroking the cats, letting off steam.

At no point in human history have so many pets been so important to so many people. We used to have stable jobs and a stable world. Now we just have stable pets – that are keeping many of us sane.

“Anxiety can result in them becoming destructive, chewing at doors or windowsills, as well as household furniture” Sean McCormack

But this leads to another, equally important question. Will our pets thrive emotionally? Or will they get sick of us being around them so much? We will need to get better at spotting indicators of pet stress, says vet and animal scientist Sean McCormack. “In dogs, signs of stress include aimless pacing, licking the skin (especially feet and paws), whining or even withdrawing from social interaction. Anxiety can result in them becoming destructive, chewing at doors or windowsills, as well as household furniture.” If the numbers of dog walks are restricted, he says the best thing is to keep them mentally active with treats and games. The PDSA has brilliant advice for those seeking more information about keeping pets, and their minds, in good condition.

Though we do know that, in a limited number of cases, cats are capable of carrying the virus, the evidence suggests that they are incapable of spreading it back to humans. Still, the advice may change in the weeks to come. Already, vets are advising that cats in infected households should be kept indoors as a precautionary measure.

So, yes – our pets will help many of us get through this, but we need to be there for them, too. We should continue to delight in their enhanced role as time-keepers, normality-bringers, stress-relievers, partners, play-things and beings we can admire, laugh at and connect with. Animals that can soothe, but never eliminate, the deep concerns and worries many of us now have.

Junior crawls back on to my lap. His purring muffles the dark voices in my head. His whiskers tickle my cheek. I try my best to stare into the void but, once again, his disgusting backside is getting in the way. He lies on his back and I rub his glossy tummy. For us both, things feel momentarily better.

From Headspace to Calm, these apps all promise to help you relax and focus